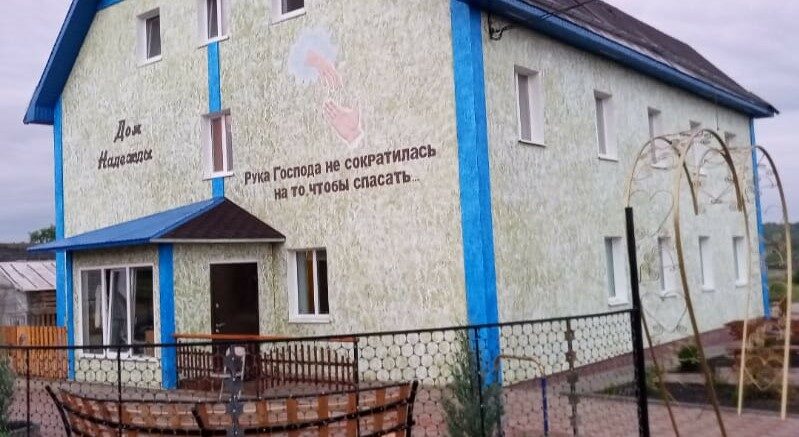 Several times in these updates, reference has been made to the ‘House of Hope’. In this newsletter, we will be sharing a more complete story and also how this place at the end of a small village in a field with no previous road access has become a destination for many.

The vision for House of Hope was born in the heart of a young single girl, Vera. Vera’s father is Pavel, the pastor of a church in the village of Pershotravneve. Pershotravneve lies about 30 miles south of the city of Kharkiv.

As a young girl, Vera had a heart for the ‘outcasts’ of society. There was the homeless man who shuffled because his legs were not equal in length. There was the old lady who could no longer care for herself but had no family to help. There was the mentally handicapped boy who lived in deplorable conditions. There was the orphan girl with no place to call home. Vera would ask her father, “Papa, can’t we do something to help? Can’t we build a place for these people to live and take care of them?”

Eventually Vera’s dream came to life. After many meetings and many prayers, one woman brought 50 Hryvnia, ($2.00) as a donation. This set in motion the decision to start building. Because of the impossibility of registering and operating as a legal institution, they built House of Hope as a private house. They would accept donations for their services, but there would be no billing.

One of the believers had a field about 1/3 mile away from the road, right at the end of the village. He offered the land. Others offered different materials. Believers from other churches helped with labor. Without knowing when the funds would be available to finish the house, the project was started with what they had. Vera herself, with help from her friends, applied the insulation and stucco to the exterior.

It took three years to finish the house. At each stage, the needs were payed for and committed to the Lord, and the Lord provided. No foreign mission or group sponsored or helped with the project. It was simply local believers working together with the resources God provided.

The home opened in 2019 and was soon filled to capacity. Not only did it provide shelter and food, but the staff held Bible studies with the residents three times a day.

In addition, since the staff included a nurse, the house became an impromptu pharmacy and clinic for the village.

After the war started, this need tremendously increased. Pharmacies quickly sold out. Many closed shop. Doctors from as far away as the city of Kharkiv told patients, “We are sorry, we have no meds. Go to the believers in Pershotravneve. They are the only ones who have meds.”

Meds were not easy to come by. The staff worked hard and drove many miles to procure supplies.

Eventually they were able to work with a team in western Ukraine that helped by gathering the needed meds together and provided delivery a part of the distance.

As the war raged near, they were always questions. Many churches in the surrounding areas were almost empty because of people fleeing. Should they flee, too? After a special prayer meeting, most of the church felt clear. The needs for ministry were great, they would continue being open to God, but for now, they would stay.

And indeed, the needs are great. Currently, in addition to the House of Hope being filled to twice its intended capacity, the pastor and others are also housing people in their homes.

This past week, the nurses at House of Hope assisted 700 people who came for medical assistance and meds. Most have no money to pay. The staff endeavors to use discernment in distributing meds wisely. For some, accessing these meds is a life and death matter. Others are asked to wait to enable them to serve those with the greatest needs.

In order to keep records clear, each person who receives meds as a donation has their passport information and the value of the meds recorded.

House of Hope has had its legal challenges. A common practice in Ukraine has been for non-state sanctioned homes to receive compensation by taking title to their residents’ apartments or other assets. Vera’s father was served a notice of a lawsuit from the state for suspicious illegal practice. However, after careful review of each resident’s case, the state eventually determined that House of Hope had required nothing from anyone and dropped the case.

Due to a dirt field lane being the only access to House of Hope, access with a vehicle in inclement weather was nearly impossible. This past week marked another milestone when the church built a road from House of Hope to the highway. With the place having become a destination for those needing meds, it was imperative to provide access.