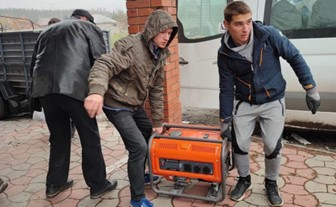 The cause was a man. One man. An extremely conniving, selfish, childish man. While he blatantly pursued his whims, the people under him lived in poverty, suffering, and despair.

For example, there was a widow. She and her young son. They had rationed and skimped and searched for months. Every edible thing was gone, except a tiny bit of oil and a tiny bit of flour.

The widow and her son were nearing the end. Today was the last day they would eat. One little dry cake to share between them and then it would be over.

That was their plan, but God had another. He moved His man to meet the widow. The man’s request brought tears to her eyes. Yes, she wanted to help, but it was too much. Desperation trickled through her voice. “I’m gathering sticks to make one little cake, that we may eat it and die.”

The man’s voice cut through the fog of despair she felt. “The Lord says, the jar shall not be spent, and the jug shall not be empty, until the Lord sends rain.”

The widow baked a cake. Bigger than she expected. She baked two more. One for her son, one for herself. And every day, every time she looked at the jar and glanced into the jug, there was enough. Enough for one more cake.

The war in Ukraine has left many at the end of their resources. The same God that moved His man to go to Zarephath has moved many of his men and women to send food, blankets, medicines, and other aid to help those who are preparing figuratively to eat their last meal and die. He moves others of His men and women to go to dangerous places and deliver this aid and speak to despairing souls about Him.

What is happening today is not random. God is deliberately and purposefully using His people to provide sustenance for those suffering because of man’s greed and pride.

Currently, the city of Bakhmut has been named the ‘most dangerous city in Ukraine’. Still held by the Ukrainians, some of Russia’s best military divisions are at its doorstep.

The battles for the city are brutal. Shells fly constantly. There is no fresh water. No heating. Little medicine. Not enough food. Around 10,000 people are estimated to still live in the city. Most live in the basements of high-rise buildings. There is no electricity, leaving the basements mostly dark. They dare not risk going outside more than absolutely necessary.

One of our teams, after receiving documents from the government allowing them to go there, traveled to Bakhmut this past week. They took blankets, a lot of meds, drinking water, and bread.

Few teams travel there currently. It is both dangerous and intimidating. Before our team was allowed to enter, they were interrogated by the Ukrainian Security Service. All vehicles were thoroughly inspected. Even their phones were scrutinized for any incriminating photos or correspondence.

This team plans to return this week. One of the things they observed on their last visit is the boredom, the despair, and the hopelessness of many living day after day in basements. Typically, these people stay in groups of ten to 30 individuals. They wait for one of two things, liberation or death, and don’t know which.

In addition to carrying in all the aid they can, our team plans to take up to 50 MP3 players with the Bible and other Christian messages and singing on them. These will be distributed one per basement. Even if it is too dark to read, and no internet to gather information from, God’s Word will be able to reach the ears of those sitting in darkness.

Because of the desperate situation, cutting trees for firewood in Bakhmut, normally strictly prohibited, is currently allowed. The question is, “Who is brave enough to work outside with shells flying at random?”

Our team is praying that God will raise up courageous young men among them to do this task. They envision creating at least one warm space where people can come and get warm periodically. We don’t know who all God’s men and women are, but we sense that He is moving many, both from the West and in Ukraine, to be instrumental in providing many people one more ‘cake’.

As much of Ukraine’s electrical grid has gone dark from targeted attacks, basic services have gone with it. One of our on-the ground teams writes;

“Three weeks ago we donated one generator for three destroyed villages in the Donetsk region. They have wells and water pumps, but no electricity. One person is now transporting this generator from village to village and people are getting water for themselves.”

Generators have become a valuable lifeline, from charging phones and flashlights, to lighting for churches and aid distribution, to running pumps for water, both potable and heating circulation.

We have requests for many generators and are working on sourcing 500 plus units. We anticipate the need for this project to be well over $100,000.00.

These units will be given to churches where possible, or to other responsible parties for community use. Churches anticipate using the opportunity to create a gathering place where villagers can gather at designated times to get warm, charge their devices, listen to the gospel, and receive Christian literature.

If God sees fit, perhaps the combined efforts of His people will be the means of providing one more ‘cake’ for many until this awful war is past.

-Josh Eicher for the AURA team

AURA (Anabaptist Ukrainian Refugee Assistance) is a team of Anabaptist brethren, most of whom have had opportunity to live in Ukraine, with a burden of helping the current crisis. Currently our efforts are focused on the critical needs inside the country. AURA has partnered with Deed and Truth Ministries for receiving and distributing funds. All funds received for this effort are sent directly to the needs.

Donations can be made online at deedandtruthministries.org or mailed to:
Deed & Truth Ministries
906 Tennessee Ave.
Etowah, TN 37331
Contact: Andrew Yoder 937-822-1884

We use cookies on our website to give you the most relevant experience by remembering your preferences and repeat visits. By clicking “Accept All”, you consent to the use of ALL the cookies. However, you may visit "Cookie Settings" to provide a controlled consent.
Cookie SettingsAccept All
Manage consent